The following topics will be covered:

The U.S. added 156,000 new jobs in September; a gain “good enough” that some analysts suggest will give the Federal Reserve enough room to raise interest rates.  Job creation in some industries such as energy and manufacturing has slowed since last year, but most segments of the economy are adding workers.  Professional services, high-tech employers, health care companies and restaurants led the hiring in the third quarter.  The unemployment rate rose slightly to 5%, the first uptick since April, mostly due to the fact that an additional 444,000 people entered the labor force.

As the U.S. economy continues to create jobs, there still appears to be no shortage of people looking for work.  The U.S. economy has added over 11.5 million jobs since the bottom of the Great Recession, but that growth has slowed over the past 6 months.  This slowdown is leading some to speculate that we are nearing full employment.  One number in the monthly jobs report that doesn’t get a lot of attention is the available labor supply—the number of people who aren’t working, but would like to.  Over the past year, this “available” work force has actually grown despite the creation of 2.4 million jobs.  It appears that as more jobs are created, even more people are being pulled off the sidelines looking for work.  Even as headlines abound that the U.S. has achieved “full employment”, there are nonetheless more than 14 million people out there who’d like to start earning a paycheck, the most in more than a year.

The number of people who applied for new unemployment benefits fell by 5,000 to 249,000 last month, the second lowest level since the end of the Great Recession.  Initial jobless claims have been under 270,000 for 14 straight weeks, an achievement not seen since the early 70s.  The low level of layoffs helps explain how the unemployment rate was able to fall below 5% this year for the first time since 2008.  Across the Atlantic in the United Kingdom, the International Monetary Fund (IMF) stated that Britain will be the fastest-growing G-7 economy this year.  The IMF also accepted the fact that its prediction of a post-Brexit financial crash was overly pessimistic.  The Washington-based IMF said Britain would have a “soft landing” in 2016, with growth of +1.8%.  However, it is sticking with its prediction of sub-par expansion in 2017, continuing to support its view that the economy would eventually suffer from its break with the EU.

The IMF has lowered its economic growth forecast for China based on China’s efforts to switch its economic engine away from investment and towards consumption and services.  The change would reduce China’s GDP growth down to 6.6% this year, and 6.2% the following year.  Frederic Neumann, co-head of Asian Economic Research at HSBC, stated, “We are a little bit cautious because we think the restructuring in China has barely begun.  We would expect the Chinese economy to slow down next year, and that could put headwinds for emerging markets going into 2017.”

The media focus during this election season has been on the Presidential race. However, the composition of the House and Senate are just as important for the future of our economy and financial markets. Congress has authority over fiscal and budgetary matters, including the power to levy taxes and tariffs.

The United States House of Representatives

In 2016, all 435 House seats are up for re-election. Republicans currently control the House 247 to 188, the biggest Republican majority since 1928. It will require a huge shift in votes from the last elections for the House to shift party allegiance. Therefore, barring very a highly unusual circumstance, a Republican House is very likely.

As the chart below shows, the Republicans currently have a small majority in the Senate. However, out of the 34 seats up for re-election this November, there are more Republican incumbents. More importantly, there are far fewer Republican-safe seats. Just a small swing in the battleground states in favor of the Democrats could change the majority in the Senate. In situations like this, conventional wisdom tells us that the fate of the Presidential candidates could determine the eventual outcome of the Senate races, the idea being that the momentum of the Presidential race would tilt the outcome of the Senate races. However, Donald Trump is a very unusual non-establishment, non-mainstream candidate and has a high negative perception among a large segment of traditional Republican voters. Therefore, we believe it is possible to have enough split-ticket voting to ensure that the Presidential and Senate races go in opposite directions. Essentially, the Senate race seems like a toss-up with both parties having an equal chance to acheive the majority of seats. 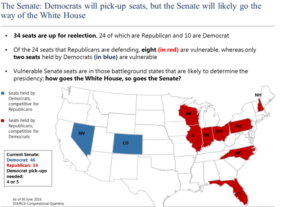 The Presidential Race is in full swing and we have just concluded the final debate. The polls in battleground states are shifting everyday. New issues, scandals and controversies could decide the outcome between now and Voting Day.

However, a look at the electroal map suggests a distincly structural advantage to Hillary Clinton. In order to secure the needed 270 electoral votes to win the Presidency, Trump has to win Florida, Ohio and retain North Carolina. Clinton can afford to lose these states except Pennsylvania, assuming she manages to retain Colorado and Virginia. 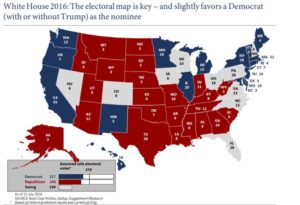 With both candidates having very high “unfavorable” ratings, we believe there will be a large number of party faithfuls voting while holding their noses.

Elections and the Economy

The U.S. government’s fiscal and regulatory policies have significant impact on the overall economy.  The effect is even more pronounced on specific sectors due to large variation in particular policy preferences. For example, traditional energy companies, particularly fracking and and coal companies, are likely to have a friendly regulatory environment under a Republican Presidency, and a hostile one under a Democratic administration. Similarly, alternative energy is likely to beneft from larger subisides under a Democratic administration. The chart below shows the likely impact of different polictical dispensations on selected economic sectors. 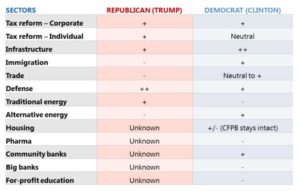 We are paying close attention to the elections and are cognizant of sector positioning that may be required per election results.

While a President can make substantial changes to the economic environment through administrative policies, he/she has no power to change the law without Congressional approval. While the Administration has considerable leeway in interpreting and implenting existing law, a complete revamp, such as major tax and regulatory reforms, require new legislation. If we look at historic market returns since 1932, we find that the composition of Congress has been far more predictive of positive returns in the market rather the Presidency. 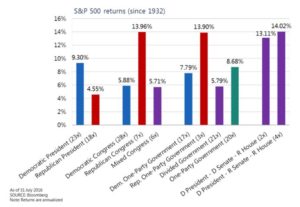 As can be seen in the chart above, contrary to conventional wisdom, markets have actually performed better under Democratic Presidents than Republican. However, the markets perform much better under a Republican Congress than a Democrat-controlled one.

At the time of writing this letter, we think the continuation of a Republican Majority in the House of Representatives is a near certainty. In the remaining weeks before the election, Hillary Clinton has a distinct, but not unsurmountable, edge over Donald Trump. The balance of power in the Senate is evenly poised and very tough to predict either way. A divided government, where the Executive and Legislative branches are under the control of different parties, seems like a very plausible scenario at this juncture.

While we must be careful to determine cause and effect between politics and the economy, history tells us the scenario of a Democratic President with a Republican House majority has historically been very good for the markets, with major indexes posting above average returns.  A divided government often leads to a gridlock with no major legislative overhaul happening. Since government action often has unfortunate consequences (both foreseen and unforeseen), we believe no new laws are on balance a good thing for the economy.  Moreover, divided government tempers the extremist instincts of both parties, and each side is forced to compromise even on legislation they manage to agree on. Therefore, change in the regulatory and fiscal environment is more gradual.  Human history tells us that, even with the best intentions, governments often do much more harm than good, so it is not surprising that a motionless or slow acting government ends up “doing less harm.”

The third quarter saw moderate volatility and an uptrend in the equity markets. The market rebounded back strongly from the collapse in global equity prices due to BREXIT at the end of the last quarter.

The chart below shows rankings of different asset classes based on their performance. As can be seen below, a diversified asset allocated portfolio always is in the median range of returns, though individual asset classes can fluctuate from very high returns to large negative returns. In the long run, the median steady returns give competitive returns with less volatility. 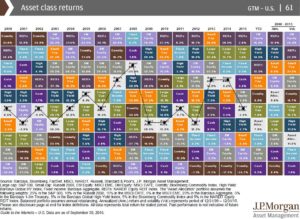 Portfolio Strategy (For managed-fee based accounts)

Over the last quarter, we made few changes to our portfolios. We sold select equity investments close to their market peak and bought a broad based defensive U.S. equity ETF. In the later part of the quarter, we were concerned that the year’s long bull market in bonds might be reaching its limit. Therefore, to reduce our exposure to interest rate risks, we rotated out of more interest-sensitive bonds into floating rate and hybrid instruments, such as preferred stocks that have low or no interest rate risk. We are pleased to inform you that our portfolio changes and positioning proved fruitful in the third quarter. Most of our portfolios outperformed their respective benchmarks significantly and with lower equity market exposure.

If you are worried about market volatility continuing, please contact us to discuss the pros and cons of allocating some funds to annuities that offer guaranteed income and/or death benefit riders, or income generating investments with limited exposure to the equity markets. Such products are sold by prospectus only and all investors must meet suitability requirements.

Thank you for choosing Prescott Tax and Wealth Management for your tax and wealth management needs. We also encourage you to take advantage of our financial planning capabilities. We can prepare a comprehensive financial plan that can provide you with transparency over questions such as “Am I fully prepared for retirement?”, “Will I be able to fulfil my life goals?”, “Is my estate planning adequate?” etc.

We also have the capability of answering questions regarding Social Security. We can help you decide how to best utilize your Social Security Benefits to your maximum advantage.  Choosing the right time and method in filing for Social Security could mean a difference of hundreds of thousands of dollars in your lifetime.

The opinions expressed are those of Prescott Tax and Wealth Management as of Oct 11th 2016 and are subject to change. There is no guarantee that the forecasts made will come to pass. This material does not constitute investment advice and is not intended as an endorsement of any specific investment. Investment involves risk. Investing in foreign markets involves currency and political risks. Information and opinions are derived from proprietary and non-proprietary sources.  Please note that investing in the stock market involves risk and no strategy can mitigate the risk completely.  S&P 500 is a registered trademark of The McGraw-Hill Companies, Inc.

Peter Prescott, a University of California at Berkeley graduate, was rigorously trained as a CPA at one of the world’s premier firms, Price Waterhouse (now PricewaterhouseCoopers). Peter honed his skills working with Fortune 500 level companies like Baskin-Robbins and Lloyds Bank. Peter’s expertise extends well beyond a steep tax background. He holds a Personal Financial Specialist (PFS) issued by the American Institute of Certified Public Accountants and has received a professional designation from UCLA’s Personal Financial Planner (PFP) program. He is also an Accredited Investment Fiduciary® (AIF), which is focused on issues for trusts, 401(k), pension plans and other situations involving fiduciary expertise. 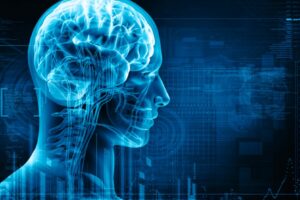 by Peter Prescott Although some of you may have already[...] 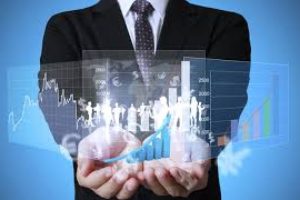 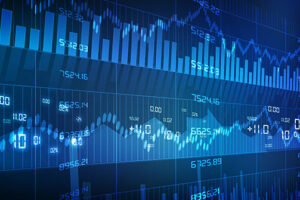